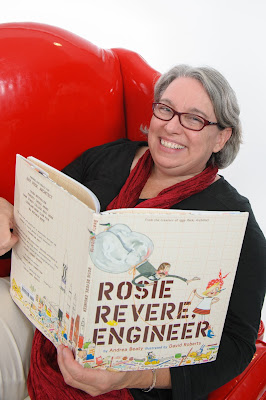 My kids and I adore Andrea Beatty's books! Rosie Revere, Engineer is one of our favorites. So we were very excited to read Andrea's new book, Ada Twist, Scientist, which came out this month.

Kirsti Call: Do you utilize picture books as mentor texts?  If so, how?
Andrea Beatty: I don't really use other books as mentor texts when I'm writing. In fact, I rather avoid reading other books in a similar vein or topic to my story for fear that it will prevent me from writing the story that's in my head. In trying to avoid steering toward that text, I would inadvertently veer off the road in a different direction. It would all be too distracting from the story that I need to write. I have enough voices in my head without complicating things further.

KC: How has reading picture books helped you discover who you are as a writer?

AB: The quality of picture books in the last 20 years has been astounding. Much, much better than when I was a kid. There were some great ones, of course, but the variety and depth of prose and magnificent illustration was nothing compare to the books available today. Seeing such a spectrum of styles was liberating for me because it helped me realize that I should just write my own stories. If they were good enough, they would find a home out there in this brave new picture book world.

KC:  Were there any particular mentor texts that inspired you in the creation of Ada Twist Scientist or any of your other books?

There are certainly books which have influenced me as a writer. HOW THE GRINCH STOLE CHRISTMAS and MISS SPIDER'S TEA PARTY come to mind. They showed me that rhyming books can include an emotional story arc and be very moving. I love rhyme, always. But often, rhyming books are sweet and silly but don't have much emotional heft to them. I still love those and have written some.

I never set out to make a point or have a moral in my stories. I find that sort of quest tedious and I think kids' do too, but my stories sometimes find their heart during the adventure. I love it when that happens because readers connect to that. Fiction is magical! 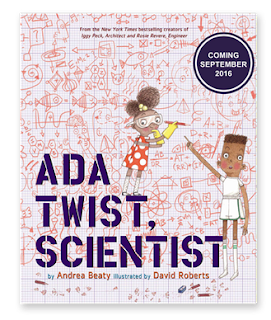 Andrea Beaty is the bestselling author of ROSIE REVERE, ENGINEER which spent more than 62 weeks on the New York Times Bestsellers List and is even going to the International Space Station with Story Time From Space!

Andrea’s  other books include the award winners Iggy Peck, Architect, Attack of the Fluffy Bunnies, and Secrets of the Cicada Summer. Andrea’s characters are smart, funny, and unapologetic in their passion. They are doers. Curiosity, creativity, innovation and persistence are recurring themes in her work. Andrea visits dozens of schools each year and is also available for Skype visits. For more information, visit her website: www.AndreaBeaty.com.