Hello, ReFoReMo-ers! Here are 10 of my favorite books that I’ve read countless times.
Re-readings always help put me in the silly writing mood I aim for: 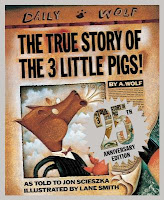 The True Story of the Three Little Pigs by Jon Scieszka and Lane Smith
Of all the books on the list, this is the one that inspired me to make books of my own. With Lane’s beautiful and hilarious illustrations, Jon’s irreverent spin on a classic fairy tale, as told by A. Wolf, is a good reminder to consider a new perspective and voice for a story. 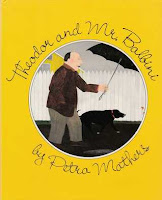 Theodor and Mr. Balbini by Petra Mathers (my all-time favorite author/illustrator)
This story about a dog and his owner made me laugh out loud the first time I read it (a line about“beef bits” still kills me!). It’s peppered with snappy, sometimes sassy dialogue and her gorgeous illustrations add even more humorous details. I’m always inspired by Petra’s ability to create stories that are sweet yet uproariously funny.

Lottie’s New Beach Towel by Petra Mathers
This is another Petra Mathers gem, as is the whole Lottie’s World series, with a cast of characters that couldn’t be more charming. A scene with Lottie, her new beach towel and a cooler brings me to my knees with laughter. It exemplifies how common, everyday experiences can be potential comedy gold. 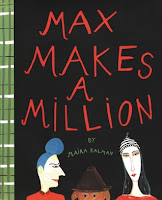 Max Makes a Million by Maira Kalman
All of Maira’s books remind me to play with words (and art!) as they explore poetry, prose, onomatopoeia (which I read is her son’s middle name!), alliteration, made-up words and what seems like stream-of-consciousness writing. This book (and series) in particular about Max the dog – poet and dreamer – highlights the importance of creating a well-thought-out, lovable main character. 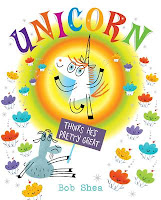 Unicorn Thinks He’s Pretty Great by Bob Shea
The competitive narrator goat in this “classic Bob Shea” book has one of my favorite opening lines ever. Full of attitude from start to finish, this is a hilarious take on the ups and downs of making new friends. 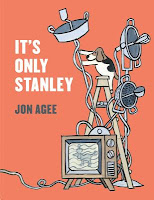 It’s Only Stanley by Jon Agee
Jon’s detailed drawings, clever phrasing and spot-on rhymes provide a fresh perspective on the passage of time as Stanley the dog keeps his family awake all night, building toward the funny, surprising ending. 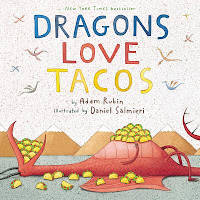 Dragons Love Tacos by Adam Rubin, illustrated by Daniel Salmieri
COMEDIC GENIUSES…the voice, the pacing, the illustrations…these two guys are BRILIANT together (another favorite is Those Darn Squirrels!)! 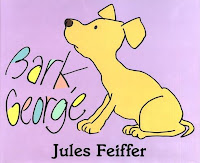 Bark, George! by Jules Feiffer
I heard Jules read this book to a group of kids and adults and they were all in stitches. It’s wonderfully preposterous and reminds me to push the writing limits to the “enth” degree. 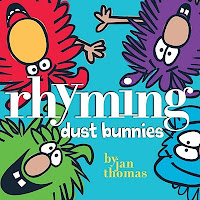 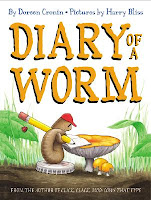 Diary of a Worm by Doreen Cronin, illustrated by Harry Bliss
Doreen’s masterful use of silly puns, simple, droll text, along with Harry’s adorable illustrations, shows us the highs and lows of a day in the life of an endearing worm. The three-book series (a fly and a spider each have their own diaries) is the perfect example of how to combine fiction and non-fiction elements in a delightfully humorous way.

Laurie is giving away one copy of either Arnie the Doughnut OR We Are Growing! to one lucky winner at the conclusion of ReFoReMo. To be eligible, please comment on this blog post and make efforts to read mentor texts regularly. 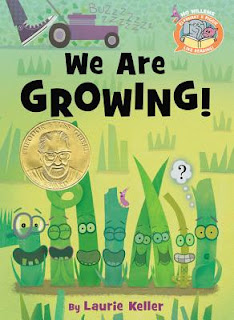 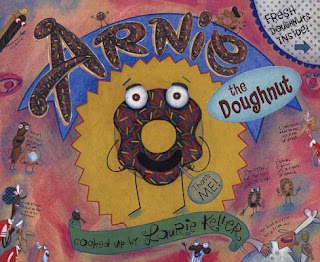 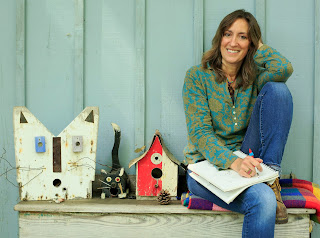 A cool story about Laurie...
Laurie Keller grew up in Michigan and entertained herself for hours at a time writing stories, drawing, painting, sculpting clay – She loved doing anything artistic. She'd always taken art classes through high school, but never realized art was a career option. She started taking education classes at the local community college with thoughts of being an elementary teacher, but also considered majoring in dance as she spent much of her time performing in the college's repertory dance tour company and choreographing and dancing in civic theater productions. One day her friend took her to a student show at Kendall College of Art and Design and everything changed. She was so impressed with the work the students were doing and excited about the possible career opportunities in the art field. She enrolled the following fall, and a few years later graduated with a BFA degree in illustration.
Upon graduation she got a job as a greeting card illustrator at Hallmark Cards in Kansas City, Missouri. She eventually started designing (and occasionally writing) greeting cards for kids. She spent many lunch hours and weekends at a nearby children’s bookstore (The Reading Reptile) looking for artistic inspiration with co-workers. She didn’t have kids and hadn’t looked at children’s books in many years. She was blown away by the fantastic books she was seeing. Laurie started collecting them and it soon became her dream to write and illustrate her own books.
One night while falling asleep, some little states with arms, legs and faces popped into her head (happens to all of us, right?). The next morning she remembered that and thought up the idea for her first book, The Scrambled States of America. She naively took it to New York City to try to find a publisher, and amazingly, got several appointments. To her surprise, she fell in love with NYC and decided, after seven and a half years, to quit her job at Hallmark and move there.
Over the next six months while preparing to move, she got a few rejection letters but didn't get discouraged. Then, the week after she quit Hallmark, she got a call from Christy Ottaviano at Henry Holt telling her they wanted to publish my story. WOOHOO! They hit it off right away and have been working together ever since.
Laurie feels very fortunate to have a career that she loves. She's met so many wonderful people as a result – kids, parents, teachers, librarians and other authors and illustrators that she admires. She loved her time in NYC but moved back to “The Mitten State” to be closer to her family. In addition to creating books, she enjoys playing the banjo (nope, that's not a typo), traveling, reading, walking in the woods and along Lake Michigan and playing with her cats.
You can follow her at www.lauriekeller.com.