Voice, that important but sometimes hard to define quality that agents, editors, and readers often look for in a story. There are many ways that a writer can convey a compelling voice in a manuscript. My favorite avenue to develop voice is with dialogue, which is why my book I HAVE A BALLOON, illustrated by Scott Magoon, is written completely in dialogue between the characters Owl and Monkey. The following books are great examples of showing voice (personality, tone, and even character development) through dialogue. 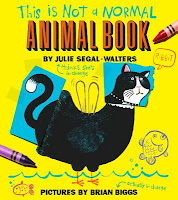 THIS IS NOT A NORMAL ANIMAL BOOK by Julie Segal-Walters, illustrated by Brian Biggs

If voice is used correctly, you don’t even need to see the characters saying the words to understand which one is speaking! The unseen author and illustrator go back and forth over how to tell this story, and even though each character’s dialogue is shown in different fonts, it’s obvious who is speaking each line based on their distinct voices. There is only one character in this book who would say, “The show must go on.” It’s easy for a reader to guess who as the previous dialogue used already shows which character loves to use Broadway lingo. 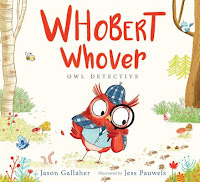 Repetitive phrases such as “Who, who done it?” are useful in establishing consistency in a character’s voice throughout a story. 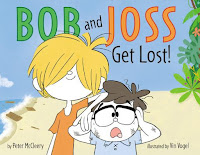 BOB AND JOSS GET LOST! by Peter McCleery, illustrated by Vin Vogel

Odd couple pairings can lead to hilarious results in picture books. Bob is focused and nervous. Joss is laid back and dreamy. McCleery of course never tells the reader about Bob and Joss’s opposing personality traits. Instead, he shows their distinct voices through every line spoken. 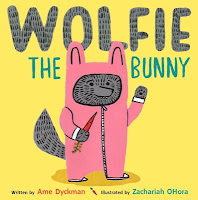 WOLFIE THE BUNNY by Ame Dyckman, illustrated by Zacharia OHora

A writer doesn’t need to use dialogue on every page to show a character’s voice. Dot’s dialogue in WOLFIE THE BUNNY is shown on less than half the pages of the full manuscript. But her deadpan delivery is all that’s needed to convey Dot’s voice of reason, as well as her gradual and believable character development. 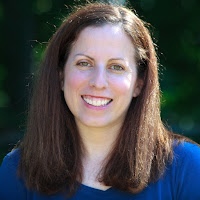 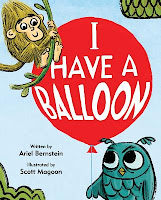 Ariel Bernstein is a children's book author. Her debut picture book, I HAVE A BALLOON, illustrated by Scott Magoon (Simon and Schuster/ Paula Wiseman Books), is available now. Her upcoming chapter book series, WARREN AND DRAGON, illustrated by Mike Malbrough (Viking Children's) will be released August 28, 2018. You can find more about Ariel at http://www.arielbernsteinbooks.com, and on Twitter and Instagram at @ArielBBooks.