Nikki Grimes is an internationally acclaimed, Coretta Scott King award-winning, New York Times bestselling author and poet. Grimes was presented with the 2017 Laura Ingalls Wilder Award, now called the Children’s Literature Legacy Award, given to those whose body of work has made “over a period of years, a significant and lasting contribution to children's literature through books that demonstrate integrity and respect for all children's lives and experiences.”

She started writing at the age of six. At seventeen, legendary playwright, novelist, and activist James Baldwin became her mentor. Listen to her friend, author, and poet Lee Bennett Hopkins, tell that story.

Books by Nikki Grimes included diverse characters, voices, and experiences long before children’s publishing embraced such writing as a movement.

This study looks at some of her picture books. Grimes also writes for middle-grade and adult audiences. Her body of work is extensive. However, even from the small selection presented here, it is clear why Grimes is indeed a master of her craft.

“The poet uses a few choice words, placed just so, to paint a picture, evoke an emotion or capture a moment in time...” Nikki Grimes
Each book in the Danitra series is a collection of story poems. And like a story, every poem has characters, and a beginning, middle, and end.

MEET DANITRA BROWN, illustrated by Floyd Cooper, is the first in the series about two good friends. It is written in rhyming free verse and narrated by Danitra’s best friend Zuri.  The language Grimes uses to describe Danitra draws the reader’s interest in her character early on.
Filled with rhythm, rhyme, and figurative language such as “Coke-bottle Brown” and “toothpick legs”, her poems address “moments in time” Danika, Zuri, and all children experience. Such moments include navigating relationships, bullying, and keeping secrets.
YOU OUGHTA MEET DANITRA BROWN
You oughta Meet Danitra Brown
the most splendiferous girl in town.
I oughta know, ‘cause she’s my friend.
[…]
DANITRA BROWN, CLASS CLOWN, illustrated by E. B. Lewis, is written in simple rhyme with sound devices that make these poems fun to read out loud. There is no confusion about how Zuri feels about returning to school in the first poem!
SCHOOL IS IN
School is in and I remember
How much I detest September
[…]
And what child has not witnessed or experienced a moment in school when the teacher asks her students to stop chatting? In this poem, the audience knows exactly how Zuri feels.
A WORLD AWAY
[ … ]
Obeying will be easier
beginning with today.
Miss Volchek made Danitra sit
three stinking rows away.

A child named Damon narrates in MY MAN BLUE, illustrated by Jerome Lagarrigue. Blue, an old friend of Damon's mother, lost a son to the streets. When Damon moves to the neighborhood, Blue is determined to protect him.

SECOND SON
[…]
“Why you want my friendship, Blue?
I blurt out there and then.
“I had a son named Zeke, “Blue says.”
“These streets became his friend.”
[…]

OH BROTHER!, illustrated by Mike Benny is the perfect title for this book written from the point of view of a boy whose mother remarries a man with a son of his own. In the beginning, the reader easily identifies with the narrator’s feelings of being disregarded and jealous. But by end of the book, the character’s growth is evident. This book includes varied rhyme schemes and poetic forms that use powerful imagery.

FOR THE LOVE OF LANGUAGE

“I think poetry does have a magical element to it, in terms of slipping pass the intellect…it touches your heart before you knew it was coming.” Nikki Grimes
Wordplay is a literary technique Grimes uses in her witty, humorous poetry. She includes words with double meanings, turns of phrases, puns, or some other humorous uses of language.
With playful language, Grimes created a fun poetry collection called SHOE MAGIC, illustrated by Terry Widener. The book is about imagining what kids are able to do when wearing a specific type of shoe. The theme is a positive spin on the idiom, “if the shoe fits.” Notice how Grimes uses the word “step” in the first poem in the book. Her poems in this collection are filled with action, energy, and inspiration. 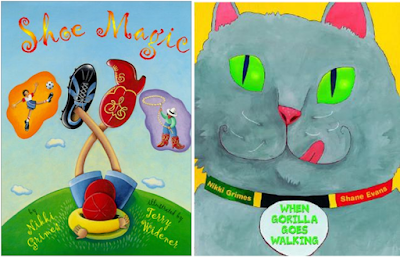 THE SHOE RACK
[… ]
What you do,
Where you go,
Who you grow
Up to be
Depends on
The steps you take.

ECONOMY OF WORDS
“I was forever challenging myself to paint a picture or tell a story using as few words as possible…” Nikki Grimes
There are dozens upon dozens of different forms of poetry. Some types are long, some are short. 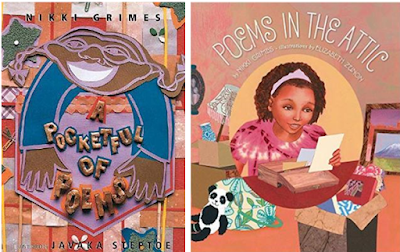 A POCKETFUL OF POEMS, illustrated by Javaka Steptoe, is a collection of free verse poems paired with others written in haiku and overflowing with imagery. A child uses words from her pocket to describe things associated with each season and in nature. Beautiful illustrations in collage accompany each spread.

Look! Here’s a fresh
green growing word.
SPRING. I plant it
like a seed.

In POEMS IN THE ATTIC, a girl discovers poems written by her mother in the attic. The mother’s poems are written in Tanka about the different experiences and places she lived as the child of a military officer.  The child, writing in free verse, responds with a poem of her own.

SUBJECTS & STORY STRUCTURE
“When all you see is your immediate surroundings, your immediate environment, your sense of what's possible is severely limited." Nikki Grimes
Nikki Grimes has traveled the world to share her poetry. Her poems and stories have touched not only those familiar with the topics and settings in her books but have opened doors. She invites people into the worlds with which they may not be familiar and welcomes her audience to imagine the lives of the people featured in her books. And she has done so using unique and compelling story structure.

In TALKIN’ ABOUT BESSIE: THE STORY OF AVIATOR ELIZABETH COLEMAN, illustrated by E.B. Lewis, Grimes writes about Bessie from the point of view of those who knew her. This structure is a work of fiction, but the information about Bessie Coleman is factual.
BARACK OBAMA: SON OF PROMISE, CHILD OF HOPE, illustrated by Bryan Collier, tells the story of a boy and how his family and experiences in the U.S., Kenya, Hawaii, and Indonesia shaped him into the inspirational person who became the 44th President of the United States.
CHASING FREEDOM: THE LIFE JOURNEYS OF HARRIET TUBMAN AND SUSAN B. ANTHONY INSPIRED BY HISTORICAL FACTS, illustrated by Michele Wood, imagines a conversation between these two extraordinary women during their fight for equal rights for African Americans and women. Readers not only learn about Harriet and Susan but Grimes introduces other activists who helped each in their individual causes. Back matter includes brief biographies of every activist and ally featured in the book.
FAITH
“As a believer, Christianity is the grid through which I view and comment on the world. That being the case, in all of my books the presence of God is assumed, faith is frequently a factor…” Nikki Grimes

Grimes is a person of strong faith which is apparent in many of her books. THE WATCHER, illustrated by Bryan Collier is a collection of golden shovel poems told in two voices. One is a girl, a school bully with a stutter. The other is a classmate who is afraid of her. In this poetic method, Grimes skillfully crafts an original narrative poem where every line ends with the next word from the Bible’s Psalm 121. This lyrical and visually stunning book is a testament to faith, friendship and the power of God’s love.
Below is an excerpt from the second poem in the book:

Wish I was some other Who, living where
stutterers aren’t treated like spit. Does
that place even exist? No. So I switch off my
hearing when Grandma says to ask you for help.
If you care, maybe you can tell me how come
Kids tease into meanness I can’t run from.

Psalms 121:1: I will lift up my eyes unto the hills, from where does my help come from?


The next time you write or revise a work in progress, think about the literary techniques poets use. Read books by Nikki Grimes and listen to the sounds and rhythm of her words. Study how they work in harmony because everyone wants to make their stories sing too.
Posted by Keila V. Dawson at 1:00 AM