Before Dev Petty became an author, she worked as a visual effects artist in the film industry. After taking a class in writing she uncovered another talent, writing stories. Petty merged her knowledge of the visual arts with her sense of humor to create humorous picture books.

One day she had an idea to write a funny story about a frog, all in dialogue. The result is the four-book series about a little frog that has one existential crisis after another. These stories are fun for children and the adults helping them as they struggle to answer the big questions about life. 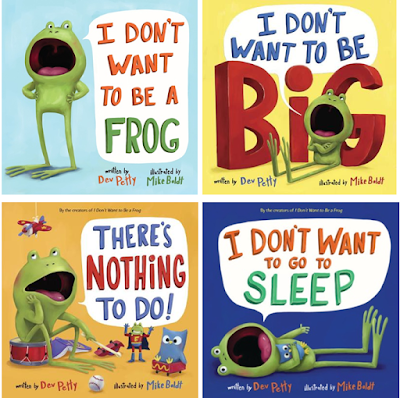 STORY - THE BIG PICTURE:
Every writer knows a story is more than a beginning, middle, and an end. A story needs a main character with a conflict. The little frog is both. In each book, adults will recognize those “moment of life” conversations they’ve had with children. When adults often offer children information to satisfy their curiosity, often the gaps in their knowledge, awareness, and experience result in some pretty funny encounters.

The story in I DON’T WANT TO BE A FROG, is about little frog’s identity crisis. In the scene below his father explains why he can’t be an owl. But the little frog persists with his list of reasons why he doesn’t like being a frog. 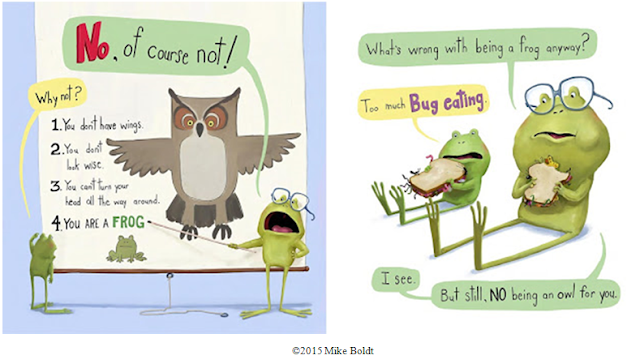 POINT OF VIEW
As the main character, each story unfolds from the little frog’s point of view. The witty writing takes readers inside the head of the main character and into the depths of how very young children think. Words in bold letters and different colors emphasize important points made by each character. The speech bubbles make the conversation easy to follow.

In the opening scene from I DON’T WANT TO BE BIG, illustrated by Mike Boldt, the little frog refuses to eat because he doesn’t want to be big. The story that follows is about this one idea. He doesn't want to change because little frog likes his life as it is. His father and friends help him understand how life does and doesn’t change when growing physically big. 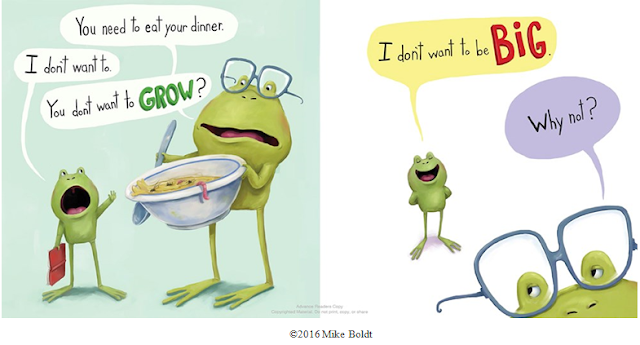 FICTION + HUMOR + NONFICTION ELEMENTS
Amphibians and other animals may not talk, but in Petty’s stories, they deliver factual information about animal nature in a fun way. Boldt’s illustrations add to the visual humor. With the father and other supporting characters, a comedy skit unfolds in each scene. The banter is delightful.

In this scene from THERE’S NOTHING TO DO, illustrated by Mike Boldt, the bored little frog seeks advice from his friends but they aren’t giving him any satisfying suggestions. 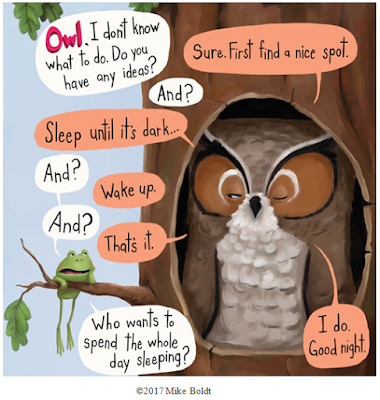 Ba-dum-bum-Tshhh!
The fourth book in this series is I DON’T WANT TO GO TO SLEEP, illustrated by Mike Boldt, releases on October 16, 2018. 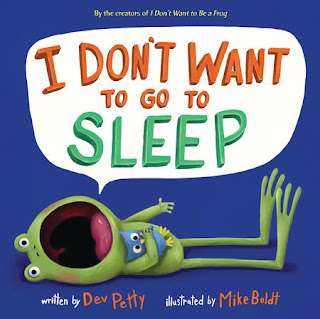 In this story, the little frog learns the harsh reality of amphibian life. Coldblooded animals like him miss out on all the winter fun because of something called hibernation. So little frog convinces his non-hibernating friends to help him with his dilemma. Petty delivers a fun twist in the end that won’t disappoint her fans.

The dialogue below shows the little frog's reaction to learning something he doesn’t understand but knows it doesn’t fit with his plans.

UNIQUE CHARACTERS & CREATIVE CONCEPT
CLAYMATES, illustrated by photographic illustrator Lauren Eldridge, is about a friendship that develops between two pieces of clay, one brown, one gray. Petty and Eldridge combine the art of storytelling with the medium of photography and clay sculpture in this creative endeavor. 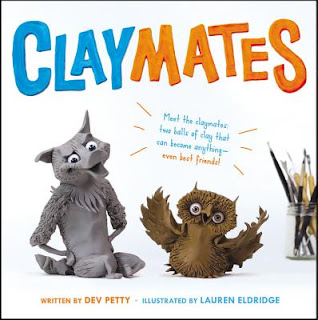 When an artist leaves the studio after shaping one piece of clay into a wolf and the other into an owl, hilarity ensues! This is one clever concept that meets any definition of quirky. The two friends engage in boundless creativity until…

The mediums used by Eldridge add unique visual humor to the all-dialogue narrative written by Petty. 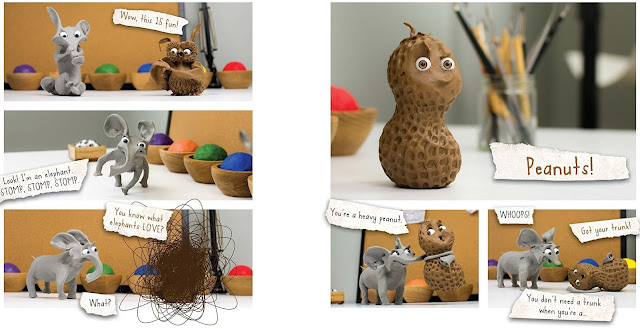 If writing humor, telling a story through dialogue, and or developing stories using a unique creative concept is on your bucket list, I highly recommend you study books by Dev Petty. Her characters are well developed using sparse text and she delivers pure comedy gold.