It's such a great joy to celebrate success with writers that we have come to know through online groups. Rita Lorraine Hubbard is a member of our ReFoReMo community, among many other common writing groups. When I saw the cover reveal for this book, I could not wait to get my hands on it. Hammering for Freedom releases today! 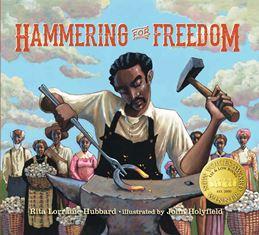 Happy Book Birthday, Rita! Do you utilize picture books as mentor texts?  If so, how?

I most certainly do!  Sometimes (actually, more times than I like to admit) I get stuck on a manuscript and need an example text to nudge me back into action. For example, I’m currently working on a manuscript where the MC is very young – possibly even pre-verbal, if I can manage it.  First I visited ReFoReMo and asked for mentor recommendations, then I compiled a list of books to check out from the library. The books provided great examples of how different authors handled stories told by very young MC’s. I was able to study how the art worked closely with the text to tell a smooth and often very funny story.  In one book, the MC didn’t tell the story, he “thought” it. I really appreciated the possibilities this particular book offered for me in terms of what I could do with my own story. In another especially delightful book called Mine! (by Shutta Crum) the MC (a toddler who hasn’t yet mastered the art of sharing) utters one word throughout the story: Mine!  It  was hilarious…and gave me hope for my own story.

Again, through those and other examples, I was better able to envision possibilities for my own story. I haven’t completed my manuscript yet; I’m still experimenting, but at least I have great examples of the different ways I (or the MC) can tell the story.

They have helped me discover how much I love history—and art. There’s nothing better than a well-written historical pb that uses breathtaking illustrations to help tell a story.  They have also helped me discover that I enjoy a range of genres. I love humorous pb’s, and collect them as often as I collect the more serious biographies.

Were there any particular mentor texts that inspired you in the creation of
Hammering for Freedom?

Three picture books come to mind. By the way, I read and reviewed these books long before my own book began to take its final shape and make its way to publication. These books had elements I never forgot, and I quickly reached for them once I began to shape and sculpt my own book. 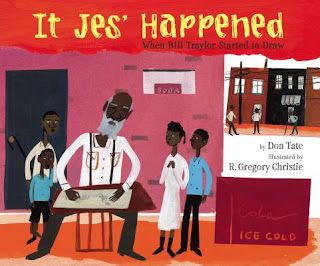 This lovely book is the story of an enslaved man who lived a very long life. After freedom comes, his wife dies and his children scatter across the country, and he ends up alone and living inside his memories. I loved how the prose emphasized his stark loneliness and his memories of what home had been like so long ago. 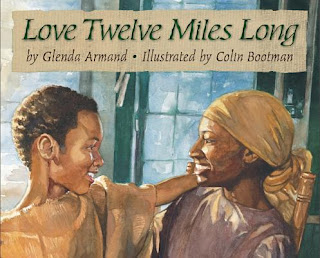 This biography captured the loneliness of little Frederick Douglass who had been separated from his mother by 12 long miles. I thought Ms. Armand prose and artist Colin Bootman’s illustrations captured Frederick’s yearning and strength he didn’t know he had, to perfection. This was what I wanted to portray in Hammering for Freedom: I wanted to show that sheer determination and the belief that he and his family could be free if only his strength held out were the driving forces that kept Bill slinging that hammer. 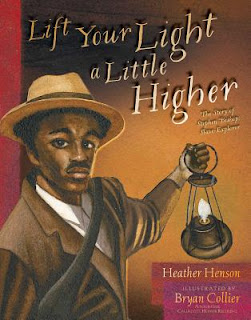 The story of Stephen Bishop, an enslaved man consigned to guiding visitors through Mammoth Cave. It took courage to learn the dark and dangerous secrets of Mammoth Cave,  including “an impassible chasm called the Bottomless Pit” where he could have drowned or met some other equally tragic misfortune in the cave, but instead he used courage and wit to make his life a little better.

Thank you so much for sharing your mentor text perspective with us, Rita, and congratulations! 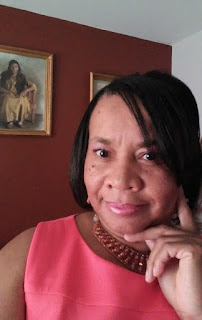 Rita Lorraine Hubbard is the author  HAMMERING FOR FREEDOM, the story of enslaved blacksmith William Lewis who rented himself from his “owner” and spent the next 25 years earning money to free himself and his family members. The book is published by Lee and Low and debuts on September 25, 2018. Hubbard has also penned a number of nonfiction books for young adults, and runs the children's book review site Picture Book Depot, and the historical site The Black History Channel. Hubbard lives in Chattanooga, Tennessee. You can find her on Facebook and also online at ritahubbard.com.