Before Tim McCanna became an author, he worked as a graphic designer, wrote songs and musicals, played in several bands, and earned an MFA in Dramatic Writing for Musical Theatre.

That's exactly how Tim McCanna writes his stories. His books are written to be read aloud and performed.

Given McCanna’s musical background, choosing to write in verse makes sense. In his stories the words flow, the rhyme is flawless, and he doesn’t miss a beat. In addition to the perfect rhyme, McCanna’s BITTY BOT books, Tad Carpenter (Illustrator) have a well-developed character and story arc.

We get to know the character in the first BITTY BOT book right away and learn what he’s up to.

In a busy robot town
bots begin to power down-

all except for Bitty Bot!
Feeling sleepy? Maybe not!

All the bots in Botsburg beep:
“Day is over. Time for sleep!”

“Kiss your papa. Hug your mamas.
Activate your bot pajamas.”

Every bot is tucked and tight?
Peace and quiet?
Well… not quite.

What's that noise in power three?
Who in Botsburg could it be?

Bitty Bot with power tools!
Breaking all the bedtime rules.

Engaging Your Audience
McCanna invites kids to make some noise in BARNYARD BOOGIE, Alison Black (Illustrator). This story features farm animals that play music in a band together. The problem in this story is finding something for Cow to do. Fun musical sounds and a refrain, “But what can Cow do? Moo?” keeps kids engaged and entertained. This story so much fun to read aloud! 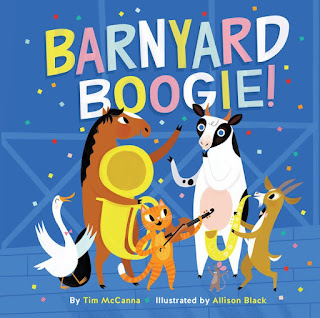 The Barnyard Band is performing today.
All the musicians are coming to play!

But what can Cow do?
MOO? 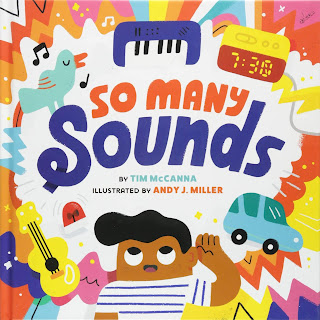 In SO MANY SOUNDS, Andy J. Miller (Illustrator), kids experience everyday sounds the main character hears as he starts his day. Each scene ends using the refrain, Oh, so many sounds to hear!

Listen! Do you hear a sound?
Noises come from all around.
Soft and gentle, loud and clear, Oh
so many sounds to hear!

The story circles back when the main character returns home and his day's end hearing different sounds.

No more noises.
Not a peep.
Everyone is sound asleep.

In JACK B. NINJA, Stephen Savage (Illustrator), McCanna takes a fresh approach to retelling an old nursery rhyme classic. In the first two spreads, McCanna hooks the audience. His audience learns Jack is a ninja who's going on a secret mission and they get to go along! 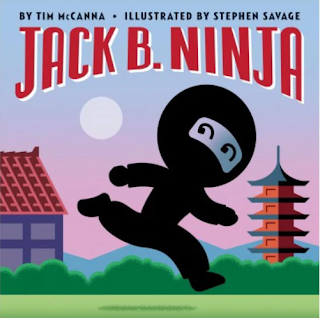 Jack B. Ninja! Jack, be quick!
Jack, jump over the bamboo stick!

Secret mission starts tonight.
Hide in shadow, out of sight.

McCanna is a ninja master of onomatopoeia demonstrated in BOING! A Very Noisy ABC, Jorge Martin (Illustrator). He not only uses onomatopoeia to tell the story using a cumulative structure supported by the illustrations, but he also alphabetized the words. Brilliant! The story starts with a sneeze that sends a boy’s ball bouncing away and sends him on a journey until he finds it. But when he returns home and falls asleep, “ZZZZZ”, the final spread starts the story all over again. 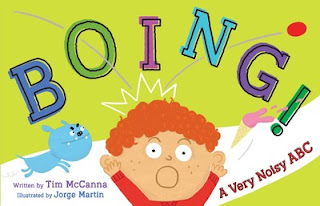 WATERSONG, Richard Smythe (Illustrator), uses the perfect combinations of water sounds and illustrations to tell a story about a fox seeking shelter during a rainstorm.  This book is an excellent example of how words and illustrations work together in harmony. 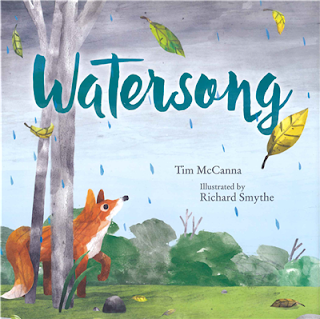 Non-fiction backmatter adds another informational layer to this fictional account.

Why do books by Tim McCanna make good mentor texts? They show us how he develops a character and story arc. He chooses a limited amount of the right words to tell his story. His rhyme is perfect. And he has mastered the literary device of onomatopoeia that is fun and engages his audience.

Each and every one of McCanna's books deserves applause. Encore! Encore!
Posted by Keila V. Dawson at 12:00 AM