Registration is under way, so we don't want to deter you from that. We wanted to offer a quick tip to those of you that are having trouble commenting on the blog posts. Even as your founder, I had trouble replying to blog comments and one simple step helped solve that problem: enabling third party cookies on my browser. For example, I am using Chrome as my browser. Take note, I am not the techiest of people and therefore, I learned how others solved the same problem. This post lists many different browsers and how to enable the cookies needed. This post talks about why Blogger relies on them. If you want to be eligible for prizes at the end of ReFoReMo, you will want to comment on every blog post. Therefore, we hope the extra information helps you!

Now, back to registration:

ReFoReMo 2019 is officially open for registration! We are excited to celebrate the reading-writing connection for the 5th year of this annual challenge. 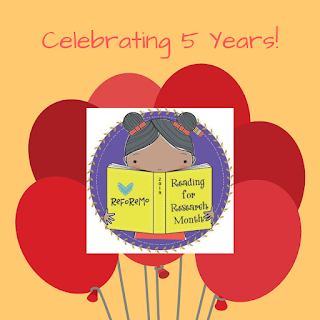 ReFoReMo is all about extracting the elements of writing through someone else's professional perspective. We follow a reading list, but the follow-through is what counts the most. From March 1-March 28, you will be presented with 20 different ways to focus on more than 105 mentor texts. As you read, you may come across the same mentor text more than once, but have the opportunity to study it in a new light. Particular elements may apply to you personally more than others. That may lead you to study additional mentor texts that are not on the list. Hooray, we say! Hooray! 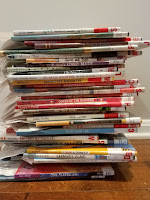 So, what do you think? Do you accept the challenge? If so, please read and follow the guidelines below to register. If you have questions about the steps, please refer them to our ReFoReMo Facebook group. Our members consist of many veteran ReFoReMo-ers who can help, plus the admin team is there to help, too.

1.   If you have not already, subscribe to this ReFoReMo blog by entering your email address into the opt-in box on the right-hand side. A Feedburner Email Subscription box will pop up. Type the captcha code listed at the bottom of the box and submit.  You will receive an email verification link in your inbox. Click the link to activate your subscription. This will enable you to receive the daily challenge posts as emails.

2.    At the bottom of this post, find the comment box. (If you already receive ReFoReMo posts in your inbox, you must click the title of the post first. That will take you to the website where our challenge takes place.) Enter your FIRST and LAST NAME in the comment box. Click on the "Publish" button. If you experience difficulty commenting, go to the ReFoReMo Facebook group. (You must request to be admitted to the private group. Please be patient.) Find the registration post pinned to the top of our wall. Enter your FIRST and LAST name in that comment thread. Note: Registration is accepted through Monday, March 4.

3.   The ReFoReMo Facebook group  was designed to build community and host discussions about picture books as mentor texts. We encourage you to discuss the perspectives and mentor texts as you read. Note: We understand that sometimes certain mentor texts are hard to find. However, we cannot support sharing video readings that break copyright laws. Look for readings created by the publisher or author before sharing those links in our group.

4.    Many of our presenters are generously offering prizes. They will be revealed during the posts. To be eligible, you must be registered, make efforts to consistently research mentor texts, and comment on every blog post from March 1-March 30. You must be on the blog to comment. Please do not reply to the posts via email.  We are on the honor system and therefore you will not need to post your results anywhere. To keep things simple, we will have only one Rafflecopter to enter on March 29 from which all winners will be drawn.

5.    You may post the ReFoReMo badge on your site or social media. Please link it back to this address:  www.reforemo.com

When March 1st rolls around, it's go time! Read the posts and book recommendations. Take notes on how this applies to your writing needs. We don't have posts on the weekends, so feel free to use that time to catch up or just rest. Utilize our research tools and start discussions in our Facebook Group. We are excited to share this educational experience with you and we hope it makes a difference in your writing!

Are you excited for ReFoReMo 2019? We are, and we want you to have a chance
to start reserving your books! Grab your library card and get comfy at the computer.
It's time to get book loopy! Registration opens next week!


Stegothesaurus by Bridget Heos and T. L. McBeth
Sterling, Best Dog Ever, by Aidan Cassie
Giraffe Problems, by Jory John
The Day You Begin, by Jacqueline Woodson
Rot, the Cutest in the World by Ben Clanton
Niko Draws a Feeling by Bob Raczka
Be Kind by Pat Zietlow Miller
Rescue & Jessica: A Life-Changing Friendship by Jessica Kensky
Cat Heaven by Cynthia Rylant
Nana Upstairs and Nana Downstairs by Tomie dePaola

The Brilliant Deep: Rebuilding the World’s Coral Reefs:
The Story of Ken Nedimyer and the Coral Restoration Foundation
by Kate Messner and Matthew Forsythe
Sun! One in a Billion by Stacy McAnulty and Stevie Lewis
I Dissent: Ruth Bader Ginsburg Makes Her Mark by Debbie Levy and Elizabeth Baddeley
Cloth Lullaby: The Woven Life of Louise Bourgeois by Amy Novesky and Isabelle Arsenault
The Boo-Boo’s That Changed the World: A True Story About an Accidental Invention (Really!)
by Barry Wittenstein and Chris Hsu
Pass Go and Collect $200: The Real Story of How Monopoly Was Invented
by Tanya Lee Stone and Steven Salerno
Joan Procter, Dragon Doctor: The Woman Who Loved Reptiles
by Patricia Valdez and Felicita Sala
Dr. Jo: How Sara Josephine Baker Saved the Lives of America’s Children
by Monica Kulling and Julianna Swaney
Ada’s Violin: The Story of the Recycled Orchestra of Paraguay
by Susan Hood and Sally Wern Comport
The Vast Wonder of the World: Biologist Ernest Everett Just by Melina Mangal and Luisa Uribe

March 19 (Day 13) Author Ruth Spiro: Connections
ALLIE ALL ALONG by Sarah Lynne Reul
DON’T TOUCH MY HAIR by Sharee Miller
MAKING A FRIEND by Tammi Sauer, illustrated by Alison Friend
I AM THE BOSS OF THIS CHAIR by Carolyn Crimi, illustrated by Marisa Morea
THE DRESS AND THE GIRL by Camille Andros, illustrated by Julie Morstad

March 20 (Day 14) Author Cindy Schrauben: Focusing on the Forest
MARY HAD A LITTLE LAB by Sue Fliess and Petros Bouloubasis
ALBIE NEWTON by Josh Funk and Esther Garay
DIVA DELORES AND THE OPERA HOUSE MOUSE by Laura Sassi and Rebecca Gerlings
THE DRAGON AND THE NIBBLESOME KNIGHT by Elli Woolland and Benji Davies
ZOG AND THE FLYING DOCTORS by Julia Donaldson and Axel Scheffler
DORIS THE BOOKASAURUS By Diana Murray and Yuyi Chen

March 26 (Day 18) Author Kim Chaffee: Biographies
BEFORE SHE WAS HARRIET by Lesa Cline-Ransome and James E. Ransome
THE WILLIAM HOY STORY by Nancy Churnin and Jez Tuya
ADA LOVELACE, POET OF SCIENCE: THE FIRST COMPUTER PROGRAMMER
By Diane Stanley and Jessie Hartland
MARGARET AND THE MOON by Dean Robbins and Lucy Knisley
SHARK LADY: THE TRUE STORY OF HOW EUGENIE CLARK
BECAME THE OCEAN’S MOST FEARLESS SCIENTIST
by Jess Keating and Marta Alvarez Miguens