Author Lesléa Newman is a poet, an author, a mentor, and an activist. The byline on her website, CHANGING THE WORLD, ONE BOOK AT A TIME sums up her goal of creating books that explore the themes of respect, celebration, and acceptance. A goal Newman is achieving given she's authored over 70 books for children and adults. Many of her books include themes that explore her gay and Jewish identities. She’s won multiple literary awards and received the 2018 Matthew Shepard Foundation Making a Difference Award for her writing and work in the LGBTQ community.

Newman is well known for writing Heather Has Two Mommies, Laura Cornell (Illustrator). Originally written in 1988, the story features a family with two female parents. The book was updated in 2015. Like many other stories about families, this one is about a child, Heather, who enjoys doing fun things with the parents she loves. When a classmate inquires about Heather's daddy, her teacher asks the class to draw pictures of their individual families. Newman’s message is one all children should hear to show pride in their families whether they have two mommies, two daddies, only one parent, or raised by other family members.

“Each family is special. The most important thing about a family is that all the people in it love each other.”

In Sparkle Boy, Maria Mola (Illustrator), multiple layers appear in this one story. Newman addresses sibling dynamics, bullying, societal gender stereotypes, self-expression, and acceptance. In each spread are realistic examples of both positive and negative ways in which children interact with one another. However, the takeaway of the story inspires children to treat one another with respect. In the scene below, Casey’s big sister Jessie is finally able to come to his defense.

Newman celebrates her Jewish heritage in many of her books. In A Sweet Passover, David Slonim (Illustrator), children learn about the Jewish holiday of Passover. A young girl, Miriam, participates in her family tradition and learns exactly how much matzah, matzah, matzah they eat during Passover. Although this is a funny fictional story, the text also adds a layer of educational information.

“She joyfully sang the Four Questions in Hebrew, and then listened as Grandpa read the answers from the Haggadah and told the story of the Jews’ exodus from Egypt in his deep, booming voice.”

Children will laugh out loud and certainly remember the Two Maccabees in The Eight Nights of Chanukah Elivia Savadier (Illustrator). Written in rhyme, this story is fun to read aloud or sing! 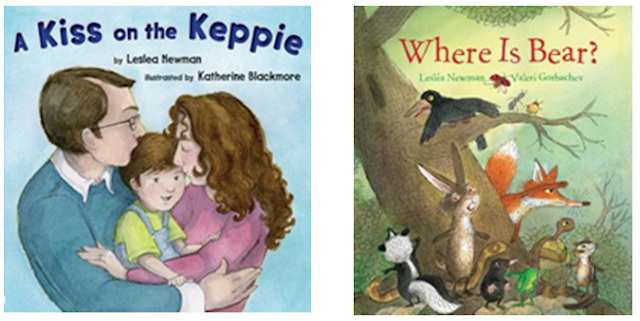 Perennially popular topics make great board books for very young children; however authors need a good hook to make them competitive in the market. Newman’s rhyme in A Kiss on the Keppie, Kris Wiltse (Illustrator), is a fun read aloud and invites the reader to interact with their very young audience. Jewish families will appreciate Yiddish terms such as "keppie" (head) "bubbe" (grandmother) and "zayde" (grandfather).
Where Is Bear? Valeri Gorbachev (Illustrator), is a rhyming hide-and-seek story. Along with other animal characters, young children engage in the quest to find the missing bear. It’s funny to think the largest character in the story is the hardest to find. And don’t miss the frog on the cover!

“Now all are found except for Bear,
No one sees him anywhere.

Beetle asks, “Where can he be?”
We’ve got to find Bear instantly!” 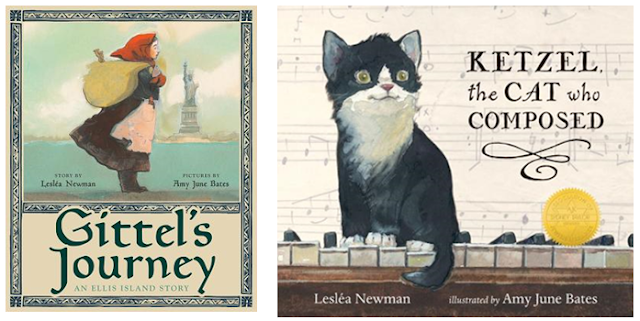 Newman weaved two events from her family history to write Gittel’s Journey: An Ellis Island Story, Amy June Bates (Illustrator). The story is an emotional account of an immigrant child who must travel to the United States alone when her mother is denied entrance to the ship due to an eye infection. Newman handles Jews’ immigration to America truthfully and in each scene, readers can feel Gittel’s hope or loneliness or fear.  Information about Jewish immigration, the real Gittel and Newman's own family stories are included in the backmatter.

“Home is not safe for us,” Mama tells her tearful daughter. “You are going to America to have a better life.”

Ketzel, the Cat Who Composed, Amy June Bates (Illustrator), about the Jewish composer Morrie Moshe Cotel, is also fiction but based on a true story. What makes this story appealing to kids is Newman’s focus on how Cotel enters a contest using a composition written by his kitten!

“Little ketzel!” Moshe cried. He often used Yiddish words when he was nervous or excited. “Come, little Ketzel,” he said, scooping up the bland-and-white kittle. “I will take you home, and we will make beautiful music together.”
“The next morning, Moshe moved a stack of music books off the top of the piano and set Ketzel down. “You must listen outside yourself and inside yourself,” he instructed as he began to play. 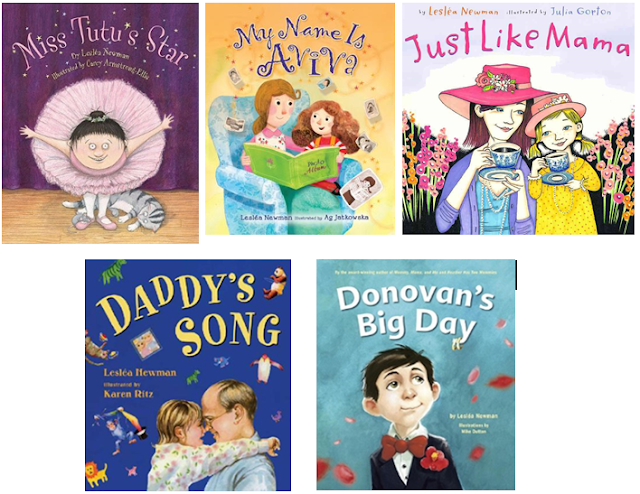 Writers should study books by Lesléa Newman because they are filled with great examples of rhyme, humor, and heart. But as important are the themes she explores and the positive messages she delivers to her young audience. Through her work, Newman is indeed changing the world, one book at a time. 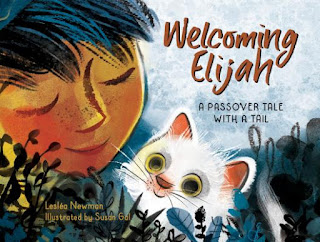