Ashley Spires  is an award-winning illustrator and author.  She lives in British Columbia, and while in high school discovered her love of creativity as a Highland dancer, and drummer in a Scottish pipe band.  Even will all her success as a children’s book creator, Spires admitted to having “imposter syndrome”. Looking at her body of work that includes graphic novels and picture books is more than enough evidence that her talent is real. 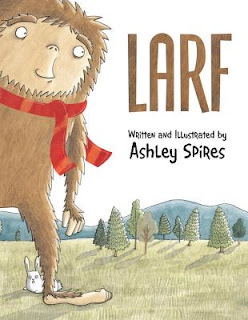 Imagine a world that has a lonely Sasquatch living in a land of humans who realizes life would be better with a friend. And then he discovers there’s another Sasquatch coming to a town nearby!

In , Spires adds layers of visual humor to her text. In an early scene a familyon TV but deny his existence. When he’s off to meet the other Sasquatch, he wears a beret and scarf as his disguise. Ridiculously funny!

The artwork description from the very beginning sets the tone and gives readers a hint at the hilarious voice used throughout the book.

“The artwork in this book  in vegetable-based watercolor, biodegradable ink, recycled paper collage, and a dollop of organic Sasquatch  and Conditioning Shampoo. This book is vegetarian, vegan and sasquatch friendly.” 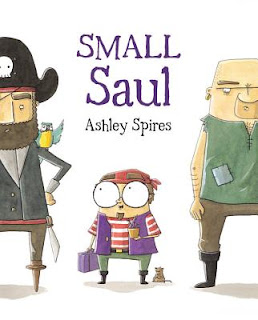 Imagine a character that is physically small, considerate, and generous. Now imagine that character as a wannabe pirate! What would it take to fit in that world?
“Small Saul was hardly a natural pirate. Being rough and touch just wasn’t in his nature.”
In Small Saul, Spires keeps Saul true to himself. It’s the secondary pirate characters that initially rejected him who learn to accept Saul for who he is. And her illustrations reinforce just how out-of-place Saul is among pirates.


“But it didn’t take long for other pirates to notice that something was different about Small Saul.”

PUT STEAM IN YOUR STORY 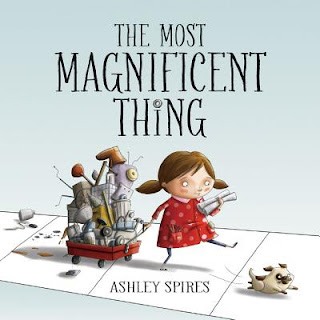 The world in The Most Magnificent Thing has a lot of STEAM in it! This is a story about what it takes to create something from an idea. From the very beginning Spires shows us the girl believes in herself and her idea. Whether you are creating a drawing, writing a story or building a ‘thing’, there is a process. And often frustration is part of that process.

She uses vocabulary found in STEAM activities to show what “make is such as “tinkers and hammers and measures,”  “smoothes and wrenches and fiddles,” “examines,” “twists and tweaks and fastens,” and “studies.

And when the girl fails over and over the scenes show the girl’s utter frustration so readers feel those same feelings.

The angrier she gets, the faster she works. She SMASHES pieces into shapes. She JAMS parts together. She PUMMELS the little bits in.

Her hands feel too BIG to work, and her brain is too full of all the not-right things. 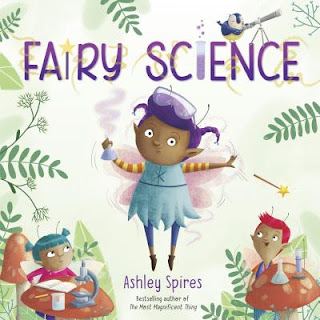 Fairy Science doesn’t release until the fall but is another example of how Spires used STEAM in her premise. What if a fairy used science to solve a problem instead of magic?

Esther does not believe in magic.

This is unusual because Esther is a fairy and fairies are all about magic.

They use magic wands and they mix magic positions. Some fairies even make magical fairy dust.

Esther is sure that’s just dandruff. 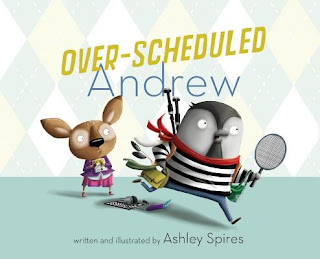 Over-Scheduled Andrew is about one very busy chickadee. In each scene reveals Andrew’s motivation for adding one more thing to his already busy schedule. Spires uses speech bubbles throughout the book to create tension, and frantic energy in place of narration while adding humor. The pacing allows readers to feel his exhaustion.

Andrew was a natural actor, but even naturals had to practice. His teacher suggested that he work on his public speaking by joining the debate club.
As Andrew’s voice got stronger, so did his arguments.

He won so many of his debates that Calvin suggested he use his smarts for the chess club. 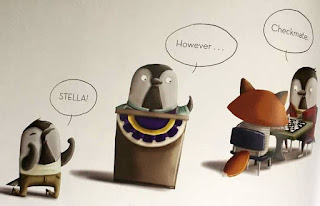 “Andrew was busy. Three days a week he stayed after school for one of his clubs.” 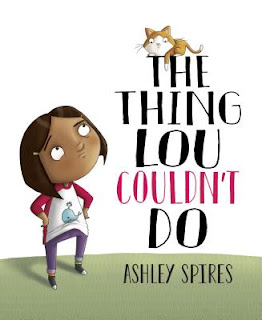 The Thing Lou Couldn’t Do is about overcoming fear. Scenes reveal the character’s struggle to overcome that fear. Again, Spires uses speech bubbles throughout the book to create tension, energy and humor in place of narration. In a couple places she uses thought bubbles to show Lou’s thinking.

Lou tells them that her arm is sore.
And anyway, the cat needs a walk.
Also, she read once that you shouldn’t climb so soon after eating.

There are SO MANY REASONS not to try.

with wonderful examples of humor, imagination, and stellar visual storytelling. Readers and writers are fortunate to have her magnificent books to enjoy and study.
Posted by Keila V. Dawson at 1:00 AM