I selected these books because they each include a twist or turning point within their narrative, which gives the reader the sense of excitement and sweetness we all love about picture books. One of the most common concerns I see with new picture book writers is the tendency to conceive of picture books as a sort of child-friendly newspaper article, or as a long list, rather than a robust story with a beginning, middle, end—and something suspenseful or unexpected along the way. The best turning points in picture books are when we see the protagonist take action, like when Clara decides to stand up to the factory bosses in Brave Girl, or when the rooster first pierces the silence in The Rooster Who Would Not Be Quiet. I included Dreamers on this list because writers sometimes feel that a poetic and tender poem such as this one doesn’t need structure, but the turning point in Dreamers is one of my favorite moments in recent picture books—when Yuyi and her son find that suspicious and improbable place, the library. It elevates the book, makes it a story with a true arc, and fills us with the wonder of discovery. 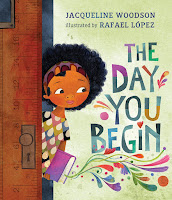 The Day You Begin by Jacqueline Woodson 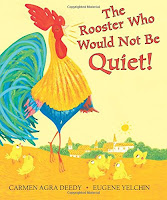 The Rooster Who Would Not Be Quiet by Carmen Agra Deedy 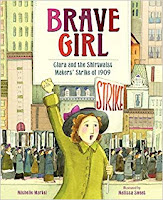 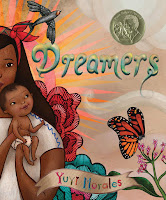 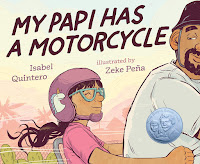 My Papi Has a Motorcycle by Isabel Quintero

Emma is giving away a skype visit to one lucky winner! To be eligible for prizes throughout the challenge, you must be registered by March 2, comment on each post, consistently read mentor texts, and enter the Rafflecopter drawing at the conclusion of ReFoReMo. 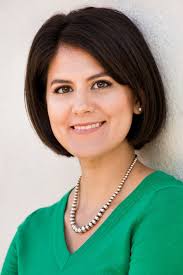 Emma Otheguy is the author of the bilingual picture book Martí’s Song for Freedom (Lee & Low, 2017) about Cuban poet and national hero José Martí, as well as her newly-published middle-grade novel Silver Meadows Summer (Knopf, 2019), which Pura Belpré-winning author Ruth Behar called “a magnificent contribution to the diversity of the new American literature for young readers.” Martí’s Song for Freedom received five starred reviews, was named a Best Book of the Year by Kirkus Reviews, School Library Journal, and the New York Public Library, and was the recipient of the International Literacy Association’s 2018 Children’s and Young Adult Book Award in Intermediate Nonfiction. Emma’s forthcoming projects include her contribution to Newbery Honor-winning author Adam Gidwitz’s Unicorn Rescue Society middle grade fantasy series, to be released in spring 2020, as well as A Sled for Gabo, the first of two picture books with Atheneum, due out in fall 2020.

Emma attended Swarthmore College, where she studied children’s literature with Donna Jo Napoli and graduated with Honors. Later, she worked in farm-based education, at a children’s bookstore, and as a Spanish teacher. She holds a Ph.D. in History from New York University, where she focused on Spain and colonial Latin America. Emma has held fellowships and grants from the Mellon Foundation, the American Historical Association, the Council of Library and Information Resources, and Humanities New York. Emma lives in New York City.

Email ThisBlogThis!Share to TwitterShare to FacebookShare to Pinterest
Labels: Brave Girl, Dreamers, Emma Otheguy, Great Turning Points, My Papa Has a Motorcycle, ReFoReMo 2020, The Day You Begin, The Rooster Who Who Would Not Be Quiet