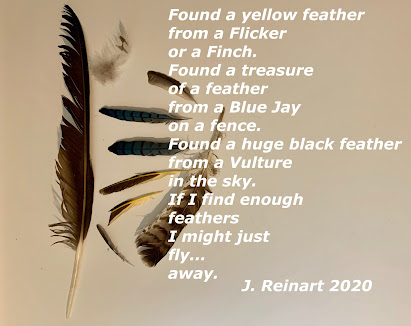 The birdies have been leaving me little gifts of feathers on my morning walks. That gave me the
idea for this month's challenge. You guessed it. Write a story about a feather.
Farhana Zia is the author of Lali's Feather and comments about writing her book in this
interview with Peachtree Publishing. Lali finds a feather in the field. Is little feather lost? Lali sets
out to find it a home. When no one wants the little feather, Lali decides to keep it. Using her
imagination cause the other birds to realize the value of the little feather.
"Lali found a feather in the field.
Whose feather?
She did not know.
It was a sweet feather, though.
Oo ma! Was little feather lost?
Lali set out to find feather a home.
Rachel Noble wrote Finn's Feather after the loss of her son. In an interview, Rachel said, "I
think Finn’s Feather looks at grief in an innocent and tender way, but I also love that it looks at
broader themes such as empathy and resilience–all children can benefit from Finn’s story."

Finn knows his brother is gone. But he also knows that Hamish sent the beautiful white feather

on his doorstep.Finn runs to shows his mother the feather from Hamish, but she only gives him a

big hug. In school, Finn’s teacher responds similarly. Why isn’t anyone as excited as he is?

Finn sits quietly, cradling the beautiful, amazing feather. “Why did Hamish give it to you?” asks

wanted you to have fun with it.”

"Long ago and far away, in a rambling garden beside a clear blue lake, two flocks of birds began
to fear each other because of their differences. The fear grew, and soon the birds became
enemies, hoarding great quantities of weapons to protect themselves--until panic struck and
the chance for peace seemed lost forever."
"In a rambling garden, long ago and far away, there lived a pride of magnificent peacocks.
Nearby, in the rushes and reeds of a clear blue lake, dwelt a flock of elegant swans."
Take a walk to get ready for this challenge.  Who knows, you might find your own feather to
write about.  Let your imagination fly away.  Happy writing.
Posted by Janie at 12:00 AM