My baby sister is twelve years younger than I am. When I first got married, we gave her a chicken from my husband's classroom.  That chicken followed my sister around like a dog. If you turned over rocks, that chicken would grab the worms. That chicken was also a watch chicken.

One night, when my brother was in high school, he came in past his curfew. My dad was a very light sleeper. My brother managed to turn the lights off on his car, coast down the driveway, and tiptoe into the house. He was almost home free. That chicken was in a terrarium in the dining room. You guessed it. The watch chicken had a lot to say like in the book, Chick Chat. That chicken alerted the whole house when my brother came home. Don't be chicken, your challenge is to write a story about these birds. 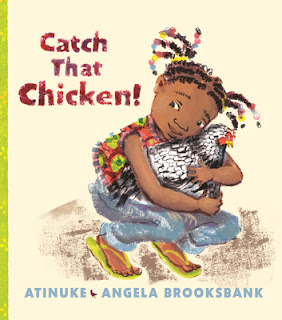 Lami is the best chicken catcher, until the day she chases a chicken up the baobab tree, and reaches too far   . . .ow! How can she catch chickens with an ankle that that looks like an "angry lizard"? Nana Nadia encourages Lami to use her problem solving skills. "Quick thinking is more important than quick running." This story celebrates Nigerian village life.

Luckily, Lami lives in a compound...

with lots and lots of chickens. 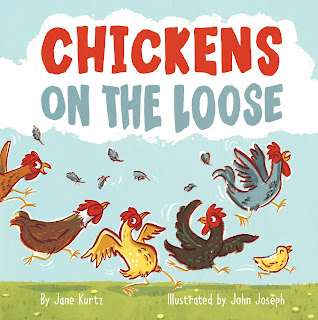 "Urban backyard chickens go on a madcap tour of the city in this rhyming romp. . . the narrative bounces off the tongue. The marker-bright illustrations are frenetic and filled with humorous details."--Kirkus Reviews

Information in the back matter contains fun facts about chickens.

Chicken's on the lam.

Zipping from the yard

as quickly as they can."

Don't forget the classic folk tale of The Little Red Hen! The hen keeps asking the duck, a cat, and the dog for help planting some wheat. When she get no takers, she does everything herself including eating the bread. Share your favorite chicken stories in the comments.

I won't make a peep. Start scratching out your story. Good luck.