Did you know there is an International Mud Day? Mud Day celebrations happen all over the world connecting children to the Earth so they discover the messy joy of playing in the mud.

My sister and I would play in the mud. We would take big leafy weeds and roll them filled with mud pretending to make cabbage rolls. We’d knock on the door and present them to my mom. Your challenge is to play in the mud and make a story. 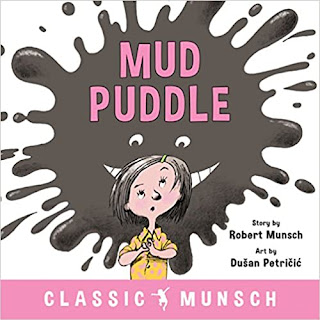 Watch out for the mean old mud puddle that hides and jumps out at you when you least expect it. How will Jule Ann clean up and be rid of that sneaky pest?

Unfortunately, hiding up in the apple tree, there was a mud puddle. It saw Jule Ann sitting there and it jumped right on her head. She got completely all over muddy. Even her ears were full of mud.

Jule Ann ran inside yelling,” Mommy, Mommy a mud puddle jumped on me.”

Her mother picked her up, took off her clothes, and threw her into a tub of water." 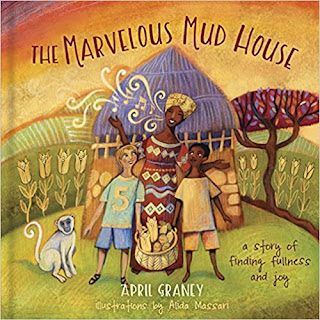 In this picture book based on a true story, Ben and his American family have been overrun by possessions and always want more. When the family travels to Kenya and visit the marvelous mud house where George and his mother live they discover a place where possessions are few but joy and harmony abound.

"On the edge of a lush mountain in Kenya said a marvelous mud house where George and his mother lived. What made this mud house marvelous was the marvelous things that happened there. Each morning as the sun flooded the great Rift Valley below, George searched the terraced garden for corn, mangoes, and potatoes, while Mama George milked the goat. Then they loaded their baskets on their backs and began their long walk down, down, down, one side their mountain and up, up, up the side of the next mountain."

I would like to add my mud story, When Water Makes Mud: A Story of Refugee Children dedicated to the 200,000 children at the Bidibidi Settlement in Uganda. I was inspired by the children and the complexity of the invented toys they made from found objects using their imagination and critical thinking skills. Children without toys—yet children who play. Play is the work of a child. Their hope becomes our hope. The universal themes of play, hope, and dreams inspired my story. Publisher's profits are being donated to UNICEF. 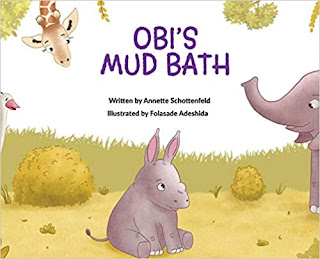 Inspired by a true event, a portion of this book's proceeds will be donated to Water.org, an organization which empowers families around the world with access to safe water and sanitation.  On a scorching day in Zimbabwe, October 2016, a white rhino bull named Mark was unable to eat or drink when a discarded tire became stuck on his snout and horn. Shona words—one of the most widely spoken of 16 languages in Zimbabwe, are used in the story.

"Obi, stared at the dried up watering hole.
The little rhino asks, “Do you know where I might find some mud? There’s nothing like a cool, ooey, gooey, mud bath…Rufaro, Tenda and Moyo counted to three - motsi, piri, tatu –“
Thank you to the ReFoReMo team: Carrie and Kirsti, Keila, Cindy and Kathy and all of you beautiful writers in our family. It takes a village to write. Keep at it. Remember why we write--to make that writer/reader connection--heart to heart.  Metaphors be with you. ❤️